In Memory of
Victor
Wasylenchuk
1938 - 2022
Click above to light a memorial candle. 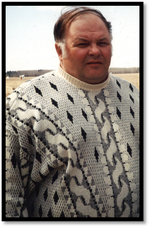 Victor Wasylenchuk passed away on Sept 23, 2022 at Preeceville and District Health Centre - LTC at the age of 83.
Victor was the first-born child of Mary (Bobowski) and John Wasylenchuk on December 9, 1938. Victor was born at the family farm/homestead which was located ten miles north of Stenen.
Victor and Alice Nightingale were married February 17, 1961 and spent the next 60+ years together.
Over his working career Victor acquired many talents. Victor started his work career as a teenager in logging camps, then moved to building telegraph lines from The Pas to Churchill, MB. He drove freight trucks for a multitude of companies. Once he landed in Flin Flon MB he worked as a hard rock miner and progressed to a journeyman welder.
He worked in Flin Flon from the early 1960’s until the late 1970’s when Victor and Alice moved the family to a small mixed farm by Hudson Bay SK. Victor worked as a welder\ fabricator at Lorne’s Welding and then the DNR. He was then transferred to DNR - La Ronge, SK. where he finished his career and retired in 1993.
Victor and Alice moved back to the farm in Hudson Bay for a few years and then decided to sell the farm and move to Stenen. In his desire to help the local community Victor ran for the office of mayor and held the position until 2021.
Victor loved to hunt and fish, play ball and travel. He met many people and had many great adventures throughout his life.
The door to Victor and Alice’s home was always open to family and friends. If you happened to be a stranger, this quickly changed as soon as you sat at the kitchen table to share in coffee and food. There was never a lack of visitors in any decade, in any home, or in any community that Victor and Alice resided.
He will always be known as a dedicated husband and father and an extremely talented, hardworking man who was willing to help anyone that needed a hand.

The Family would like to thank everyone in attendance and everyone who have shared condolences but were unable to attend the service.