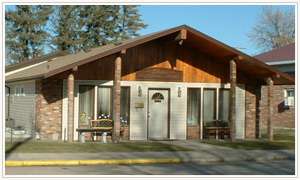 The funeral operation at Porcupine Plain was originally started in 1948, when the local doctor persuaded Willis Jacques to start looking after deaths in the area as the nearest funeral home was at Tisdale, SK., and roads were very bad in this area at that time. Mr. Jacques ran the funeral home along with the tire shop, which he also owned. Eventually, he started to provide an ambulance service also. He finally sold the tire shop and continued to operate the funeral home until 1977, when he sold the business to Reg Graham, who in turn, sold it a year later to John Mirka. Mr. Mirka operated the business for four years until 1982. During all these years the business had operated under the Government "Two Dollar" permit. The funeral home was purchased by Gordon and Verna Blair in 1982, who had previously moved to Saskatchewan from Alberta. Gordon was the first Licenced Funeral Director - Embalmer to move to Porcupine Plain.

In July of 1982, Mr. Blair started a funeral service in Hudson Bay, 60 miles away. This area had a funeral home many years ago, but for some 15 years had been without this local service and families were attended to by about four surrounding funeral homes.

In 1986, the Blair's demolished the old building at Porcupine Plain and built a new funeral home. This addition was most welcome in the Community. In December of 1989, the Funeral Homes were sold to Basil & Rosemarie Forsberg. The building in Hudson Bay was sold and they relocated to their new location in about 1990. In 1992, after receiving numerous calls from the Kelvington area, they began the process of opening their third location. After the years as the business continued to grow, the need to expand the main location in Porcupine Plain became necessary, so in 2004, approximately 3000 square feet was added to the funeral home.

In 2008, after working for the Forsberg's for more than 16 years, Terry Zip and his wife Leanne purchased the three locations, and with a very dedicated staff, Blair's Funeral Home Ltd. will continue to serve the Northeast part of Saskatchewan for years to come.

The pinnacle of memorialization, any family member or friends can take advantage of this free services by creating an account and a book to memorialize their loved one.

If you have immediate need of our services, we're available for you 24 hours a day.

It is not always possible to pay respects in person, so we hope that this small token will help.

Dying is one of the few events in life that's certain to occur, yet one we rarely plan for. Should we spend more time preparing for a two week vacation than we do our last days on Earth?

It can be difficult to find the right words, so we have hand-picked a collection of sympathy and remembrance gifts that will be cherished.

Offer a gift of comfort and beauty to a family suffering from loss.

Grieving doesn't always end with the funeral: subscribe to our free daily grief support email program, designed to help you a little bit every day, by filling out the form below.

It's hard to know what to say when someone experiences loss. Our free weekly newsletter provides insights, quotes and messages on how to help during the first year.