In Memory of
Edward Allan
Gagnon
1948 - 2022
Click above to light a memorial candle. 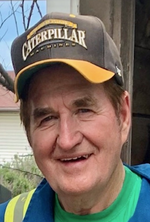 Edward Allan Gagnon was born in 1948 to Joseph and Alice Gagnon at Tisdale, SK. He lived in Tisdale and then moved to Prairie River where he attended school. At 15 years of age, he began working which included potash mining in Esterhazy, concrete worker in Outlook, the McMillan Bloedel sawmill, and trenching with Ardel Paproski. Ed then started to focus on building a career in the bush. He married the love of his life Marion Dutkiwich on July 29, 1967, in Hudson Bay. Together they raised their three daughters and son in Hudson Bay. Ed continued to work in the forestry industry and established Ed Gagnon Logging company where he was a contractor for Simpson Timber until 1990. He operated every machine, fixed all his own equipment, and drove his own logging trucks while managing many employees over the years. When he sold his company, Ed decided in retirement he would work on the highways for Dean Hanson, drive a Hydrovac truck for Les Gagnon, and work as machine operator on a tree Processor for Curtis Palaniuk until the spring of 2022. Retirement was going so well that Ed planned to work again this winter at the age of 74. He also enjoyed attending every sporting event of his children and grandchildren, fishing with his son, buying and selling cars, playing cards with Marion, family and friends.
Predeceased by: His parents, Joe and Alice Gagnon; parents-in-law Walter and Marge Dutkiwich; brother and sister-in-laws Willow Dutkiwich, Robert Dutkiwich, Ken Dutkiwich, Walter Tschetter, Rose Dutkiwich, Ethel Dutkiwich, Betty Gagnon; granddaughters Alexa Babyak, Victoria Babyak.
Survived by : Wife; Marion: daughters; Shelley (Dean) Smith, Sandra (Brad) Babyak, Shirley (Kevin) Matiasz, son; Rod (Samantha) Gagnon: Grandchildren; Nevada (Gerrit) Smith, Daven Smith, Easton (Shawna)Smith. Talon Smith, Dryden Smith, Reagan (Paige) Babyak, Bronson Babyak, Charleece Babyak, Shaelynn Matiasz: Karsten Matiasz, Shiloh Matiasz: Brothers; Les (Paulette) Gagnon, Barry Gagnon, Danny (Linda) Gagnon, Sister Joanne (Greg) Sundquist: In-laws; Nellie Tschetter, Maria Dutkiwich, Russell Dutkiwich, Randy Dutkiwich, Sandy Dutkiwich, as well as numerous nieces, nephews, aunts, uncles and cousins.