In Memory of
Sally
Chaykowski
1931 - 2022
Click above to light a memorial candle. 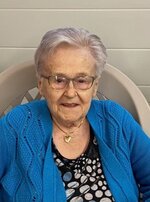 Sally was born on November 20, 1931 in Smuts, SK. She was a year and a half old when her parents moved to a homestead by Porcupine Plain, SK. She attended school in High Tor, a very long walk for her. She loved gardening, flowers, reading, playing cards, visiting with her Grandchildren of all ages, and socializing with her lady friends whenever she could.
In 1950 she married Steve Chaykowski. They bought a farm near Greenwater Lake. They also picked rice in Ontario and Manitoba for $1.00 a pound in the summers. In the winters they worked in bush camps where Sally cooked. Sally worked as a School Bus Driver. She also worked at Greenwater Provincial Park for many years. Sally retired from the lake in 1991. In 1971 they bought a house in Porcupine Plain. Sally eventually moved into a four-plex in 2015, where she lived until her passing.
Sally is survived by her three children, David (Gloria), Judy, and Brian; Her Grandchildren, Pamela (Gerry), Trischa (Ian): Sandy, Ashton (Travis), Devon (Delaney): Jason (Michelle); her Great-Grandchildren, Emily, Avery, and Ethan, Matthew, Andrew, Dylan, Dawson, and Destiny, Justyn, Billie, Shayne, Wyatt, Sawyer, Faith;her Great Great-Grandchildren, Bohdan, and Remington; her Sister-in-law Rose Gandzalas; and her Brother-in-law Alex Chaykowski.
Sally was predeceased by her Parents, Joseph and Caroline Kurylowich; her Husband Steve; her Parents-in-law, Peter and Joyce Chaykowski; her Brothers Bill and Leon, and Sister Mary; her Stepbrothers and Stepsisters, Tony, Julian, Frank, Jean, Nellie, Annie, and Josie; her eldest Son Edward, and her Grandsons Dallas, and Steven; also her beloved Daughter-in-Law Lori Chaykowski.

Donations in memory of Sally can be made to the Porcupine Carragana Hospital Memorial Fund.